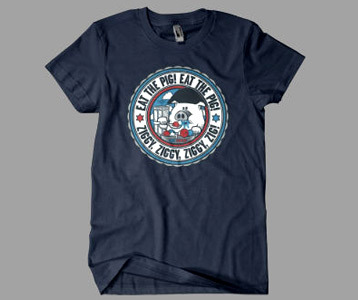 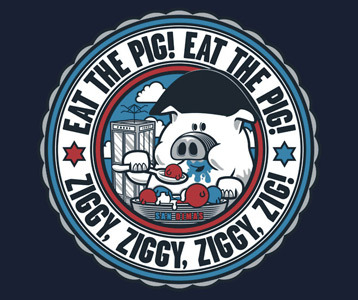 Celebrate the single greatest ice cream spectacle known to man, the Ziggy Pig!  This Bill and Ted’s Excellent Adventure t-shirt displays a logo for the enormous bowl of ice cream, complete with marshmallows, whipped cream and a cherry on top.  In the movie, French emperor Napoleon travels to present day San Dimas, where he visits an ice cream parlor.  When the employees bring out his dessert, they chant, “Eat the pig!  Eat the pig!  Ziggy, Ziggy, Ziggy, Zig!”  After he’s finished, the employees congratulate him for eating “the pig”, saying that it proves that he’s a “Ziggy Piggy”.  After giving him an honorary pin, they hold up the tips of their noses and make snorting noises.  This Ziggy Pig shirt will make you want to conquer the giant ice cream treat yourself, or it will at least put you in the mood for a bowl of whatever is in your freezer.