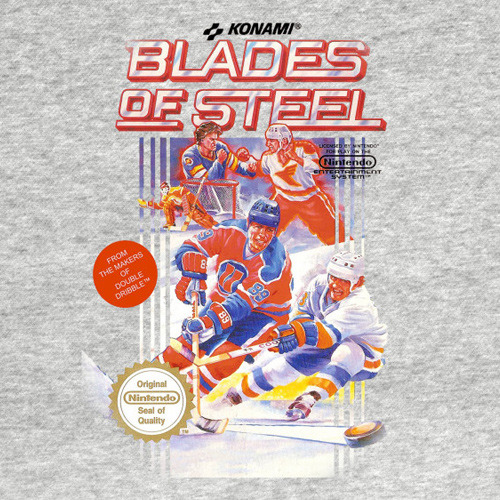 The Nintendo Blades of Steel video game is hands down the best sports game for the NES console.  Sure, I might be biased due to the fact that as a kid growing up in the 1980s and early 90s, my friends and I used to whack the pavement every day with our street hockey sticks and Penguin t-shirts on, dreaming that we were Mario Lemieux, Wayne Gretzky (the enemy) or defenseman Paul Coffey.  On rainy days when puddles littered the streets and our rollerblades had to be shelved, we would stay inside and sit around the NES playing Blades of Steel.  The game, whose box art is displayed here on this Blades of Steel t-shirt, offered the next best thing to the fast-paced hockey action that we found on the street outside.  There was even an announcer of sorts, who uttered what became the video game’s signature catchphrases, including “With the pass!”, “Faceoff!”, and “Fight!”

Originally released by Konami for the arcade in 1987, the NES Blades of Steel game was ported to the Nintendo Entertainment System console in 1988.  It features eight teams, four from the United States and four from Canada.  Players can choose either “Exhibition” or “Tournament” mode, with the latter featuring a series of games similar to the NHL playoffs.  If a player’s team is successful at beating all of the opposing teams, that player’s team is awarded the Konami Cup.  Rekindle all of the glory in this Blades of Steel t-shirt or use it as a prize for a reunion tournament with your friends.  If this Blades of Steel tee doesn’t satisfy your feelings of nostalgia, the classic NES hockey game is available to play via the Nintendo Wii’s Virtual Console and the arcade version is available to play on Microsoft’s Game Room.