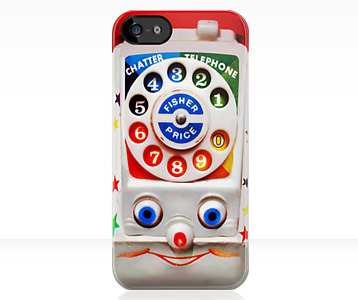 If you recognize this Chatter Telephone iPhone case, it's because it is based on the Fisher Price toy phone that was introduced in the early 1960s.  The Chatter Telephone saw a resurgence in popularity after it was featured in the 2010 Pixar movie Toy Story 3.  Here, we feature it as an attractive toy phone iPhone case.  Originally designed as a way to teach youngsters how to dial a rotary phone, Fisher Price changed the interface to a push-button version in 2000, but consumers complained and the rotary dial was put back.  Let others know that you're a kid at heart with this Fisher Price Chatter Telephone phone case.

This Toy Story t-shirt was discovered at RedBubble.