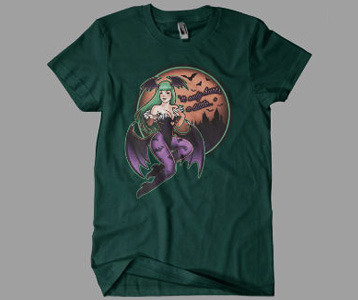 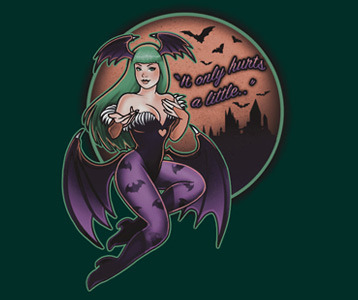 Introduced in the popular 1994 Capcom video game Darkstalkers: The Night Warriors, this Morrigan t-shirt celebrates the game's most popular character, Morrigan Aensland.  Named after a Celtic goddess, she can be identified by her light green hair and the bat-like wings that protrude from her head and back.  She has the ability to reshape her wings into blades and spikes when fighting her enemies.  They can also shield her from enemy attacks or separate from her completely, turning into a swarm of bats.  If you are a fan of Darkstalkers or any of her other subsequent Capcom appearances, then this Morrigan Aensland shirt is fitting attire to wear as you cheer on your favorite Darkstalker.