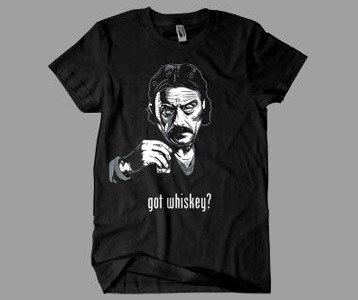 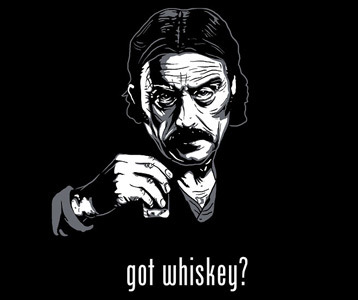 If you’ve ever watched the HBO TV show Deadwood, then you surely remember actor Ian McShane’s Golden Globe Winning portrayal of the foul-mouthed, whiskey-drinking Al Swearengen.  The show chronicles the rise of Deadwood, South Dakota from a small camp to the area’s eventual annexation by the Dakota Territory.  Perhaps the most interesting aspect of this HBO TV series is the fact that many of its characters are based on real life historical figures.  This includes the man behind the character on this Got Whiskey? Al Swearengen t-shirt (yes, that is his real last name) and others, including sheriff and hardware store owner Seth Bullock (Timothy Olyphant), gunfighter and folk hero Wild Bill Hickok, Seth’s business partner Sol Star, frontierswoman Calamity Jane, Wyatt Earp and more.  The creator of the TV show used diaries and old newspapers from the 1870s town to help formulate the storylines.  Head west in this Deadwood t-shirt that features one of its most memorable characters.  Got whiskey?