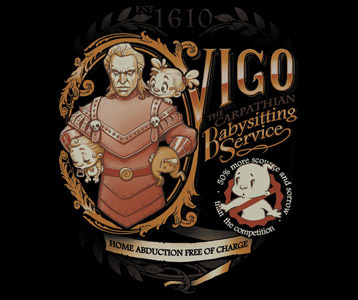 If you are a fan of Ghostbusters II or the video game that was released in 2009 (to coincide with the 25th anniversary of the original movie), then you probably recognize the 16th Century medieval sorcerer on the front of this Ghostbusters Vigo t-shirt. Ray Stantz (Dan Aykroyd) refers to him by his aliases, "Vigo the Cruel," "Vigo the Torturer," "Vigo the Despised," and "Vigo the Unholy." Peter Venkman (Bill Murray) humorously adds "Vigo the Butch." Taking up residence inside of a self-portrait that was painted before his death, Vigo plans to possess Dana Barrett's baby Oscar in order to be reborn in physical form so that he can once again rule the world. This is the inspiration for this Vigo the Carpathian shirt, which promotes his babysitting service, a creative pun on his role in the film.

This Ghostbusters t-shirt was discovered at TeePublic.