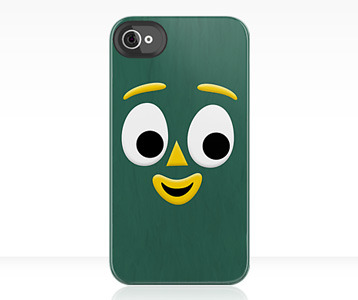 The first thing that struck me about this Gumby case is the fact that it looks like you could almost peel the facial elements right off, despite it being a flat design.  This is a nod to the designer, who did a superb job of capturing the claymation aspects of the character.  The image immediately reminded me of the character’s resurgence in the late 1980s.  However, most fans will remember that the iconic clay character first appeared in the 1950s on The Howdy Doody Show, before landing his own spin-off series in 1957.  This green Gumby iPhone case captures his friendly and malleable personality.

I can remember playing with my own bendable Gumby toy, even though at the time I never realized why the character looked the way he did.  At the recommendation of his wife Ruth, filmmaker Art Clokey modeled the character after the Gingerbread Man.  Green was Art’s favorite color, so he opted for a green body.  The slanted head was inspired by Art’s father’s haircut in an old photograph.  The wide legs were necessary to support Gumby’s clay body and ensure that he would not fall over during filming.  If you still find Gumby, his sidekick Pokey the poney, the Blockheads and Prickle cool, then this Gumby iPhone cover might just inspire you to create your own stop motion clay animation film, something that’s now a possibility with the iPhone 4’s video camera.