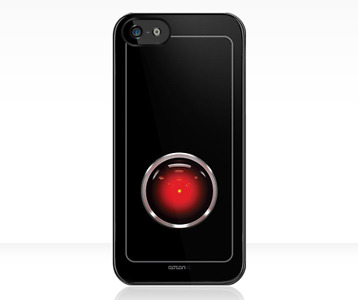 Unless your name is Dave, you’ll probably get along fine with this 2001: A Space Odyssey iPhone case.  The design depicts the recognizable camera eye that was in various locations on the Discovery One spacecraft in the movie.  The computer system behind the eye, known as HAL (Heuristically programmed ALgorithmic computer), is the film’s main antagonist, capable of reasoning, speech recognition, facial recognition and interpreting human emotion.  HAL always speaks with a calm voice despite its often sinister intentions.  This HAL 9000 iPhone case displays the familiar camera eye plate seen in the movie.

During the years since the release of Arthur C. Clarke’s science fiction novels and director Stanley Kubrick’s movie, fans have disputed the origin of the A.I. system’s name.  Many fans believe that the name HAL came from shifting the letters in IBM one position to the left in the alphabet.  This theory was refuted by Clarke himself in his book The Lost Worlds of 2001, where he states that the name is an abbreviation for Heuristically programmed ALgorithmic computer.  Regardless of the origin of its name, this HAL 9000 iPhone cover is the perfect nod to the 2001: A Space Odyssey movie and one of the most memorable villains of all time.