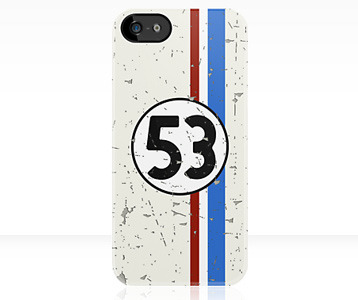 Everyone's favorite anthropomorphic car rose to prominence in 1968 with the release of the Walt Disney film The Love Bug.  This iPhone case displays the 1963 Volkswagen Beetle's number 53 and its familiar red, white and blue racing stripes.  The name Herbie came from a popular skit by comedian Buddy Hackett.  Producer Bill Walsh chose the number 53 as Herbie's racing number because it was the number of one of Walsh's favorite baseball players, Don Drysdale.  Walsh was also the person who gave Herbie his patriotic racing stripes, chosen for obvious reasons.  If you're a fan of the original movie, it's four sequels or the toys and merchandise that have coincided with the Disney franchise, this Herbie iPhone case will help to give your phone its own unique personality.