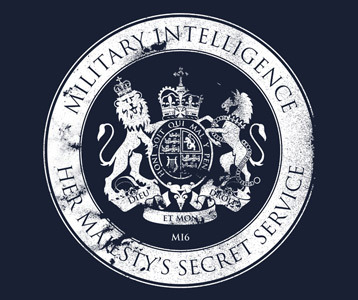 Not only do we recognize James Bond by the fact that he is a member of Britain's Secret Intelligence Service (SIS), commonly referred to as MI6 (Military Intelligence, Section 6), we also know him by his code number, 007.  This Her Majesty's Secret Service t-shirt displays the logo for the MI6 organization.  It is a must have for fans of the fictional James Bond character, who made his debut in Ian Fleming's 1953 novel Casino Royale and was subsequently featured in eleven follow-up novels by Fleming, in addition to twenty-three movies to date, the most recent being 2012's Skyfall.  Let everyone know that you're On Her Majesty's Secret Service in this MI6 shirt that will make you feel like you're a member of the elite division.