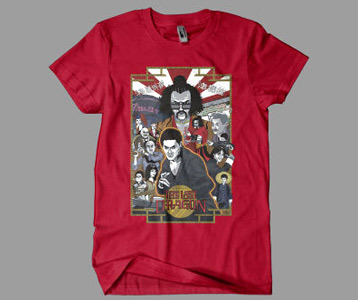 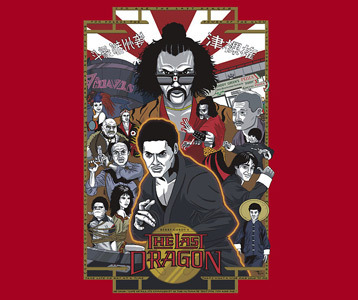 Now considered a cult classic, the 80s’ martial arts movie The Last Dragon was a commercial success, despite being panned by critics.  I can still remember when I saw the movie back in 1985 as a young kid.  Inspired by the film, I can still recall playfully wrestling with friends, during which time we’d jokingly ask one another, “Who’s the master?” The movie’s memorable quote was used in a similar manner that the phrase, “say uncle” is used, in an effort to get a person to submit to the torture of a noogie or something similar.  The Last Dragon movie t-shirt shown here displays a custom poster style design featuring many of the movie’s characters, including a glowing Leory Green and his arch enemy Sho’nuff, the Shogun of Harlem.

The story revolves around teenage martial arts student Leroy Green and his quest to become The Last Dragon, the best fighter alive.  This particular martial arts master is said to possess “The Glow”, a mystical energy that causes the body to glow.  As he trains to achieve this level of skill, he must face villains like arcade mogul Eddie Arkadian and Sho’nuff, the latter of whom he must protect his little brother Richie and his romantic interest Laura Charles from.  Both Richie and Laura are also featured on this Last Dragon shirt that includes the movie logo as well.  Wear it to imagine yourself harnessing the power of The Glow.