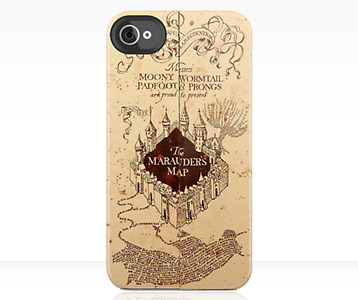 Feeling a little lost?  Get back on track with a Harry Potter Marauder’s Map iPhone Case.  The concept of a map that could depict the whereabouts of everyone on Hogwarts property at any given time was the idea of Moony, Wormtail, Padfoot and Prongs, better known as Remus Lupin, Peter Pettigrew, Sirius Black and James Potter, respectively.  Fred and George Weasley lifted it from Filch’s office many years after it was confiscated from the group.  Ron’s brothers passed it down to Harry so he could venture to Hogsmeade with his friends.  Take your Marauder’s Map iPhone cover with you wherever you go to keep a little magic in your life.