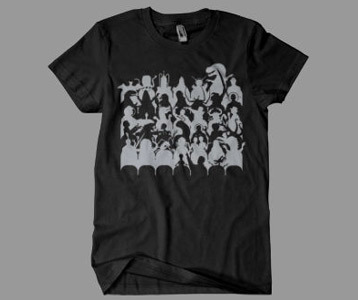 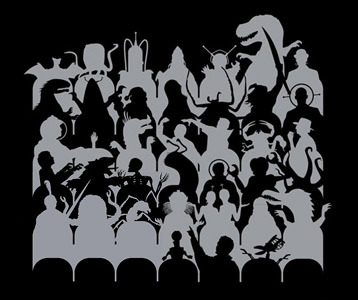 During high school and college when I used to work at the local movie theater, we would run movies for ourselves after hours when the building closed its doors to the public.  These private screenings often included beer in conjunction with the lamest movie that was currently on the schedule.   Much like the premise of the Mystery Science Theater 3000 TV show, my friends would offer their own commentary as the movie ran, hoping to earn a few laughs from their peers.  The problem was that a lot of the time I would want to actually “watch” the movie in question, and the drunken commentary of my friends was more of a distraction than entertainment.  However, with regard to the cult TV show represented by this MST3K t-shirt, the commentary was the best part because the science fiction B-movies that were playing could hardly be taken as serious filmmaking.

The premise of MST3K (as it’s known to fans) serves as a pretext to explain the existence of the TV show’s running commentary track.  This Mystery Science Theater 3000 t-shirt features silhouettes of Joel Robinson, the former janitor, and his robot friends in front of a screen of B-movie characters.  In the series, Robinson and his friends are abducted by two mad scientists, Dr. Clayton Forrester and his sidekick Dr. Laurence Erhardt, with the purpose of forcing their prisoners to watch horrible B-movies in an effort to measure each movie’s mind-numbing effects.  Their ultimate goal is to find the perfect B-movie that’s so bad it turns viewers into zombies, thus facilitating Dr. Forrester’s goal of world domination.  This MST3K TV show shirt is a tribute to Joel Robinson and his fellow captives, who were trying to make the best out of a bad situation.