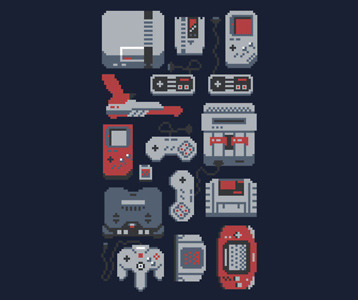 Those of us who grew up in the 1980s and 1990s will easily recognize many of the images on this 8-Bit Nintendo t-shirt that displays a variety of NES related components from our childhood.  There’s the classic Nintendo Entertainment System with its light gun and two controllers that debuted in the US in 1985.  There’s the Game Boy (1989), Game Boy Color (1998) and Game Boy Advance (2001) handheld video game consoles.  The NEStalgia shirt also features the Super Nintendo (1991), Nintendo 64 (1996) and their respective controllers.  If you’re looking for a way to celebrate your own history of gaming NES style, this 8-Bit Nintendo shirt will have you harking for the days when life was a lot simpler, mainly because it was made up of less bits.

This t-shirt was discovered at Threadless.