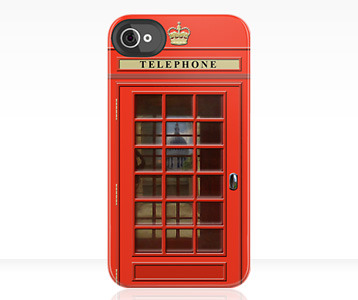 For Americans who’ve never been to the United Kingdom, the closest they’ve probably gotten to one of the UK’s famous red telephone boxes (or red boxes) is in the World Showcase in Walt Disney World’s Epcot theme park.  The iconic phone booths first appeared on United Kingdom streets in 1924, after local boroughs wanted an alternative to the Post Office’s attempt to erect their own concrete telephone kiosks.  A design competition was held and the winner was Sir Giles Gilbert Scott, an English architect.  Celebrate the historic UK red box with this Phone Booth iPhone Case.  Ironically, the numbers of these nostalgic red box kiosks are dwindling due the emergence of the cell phone and similar technology that makes this mode of communication less needed.  That is, of course, until you find that your cell phone battery has died.