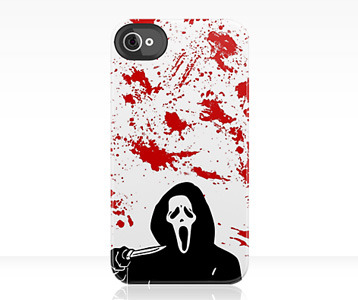 “What’s your favorite scary movie?”  If that question rings a bell, then you are probably going to pick the slasher movie on this Scream iPhone case as your all time favorite.  After its release in 1996, the masked Ghostface Killer quickly became one of the most recognizable horror film faces ever, ranking among classics like Halloween’s Michael Myers, Nightmare on Elm Street’s Freddy Krueger and Friday the 13th’s Jason Voorhees.  This Ghostface Scream iPhone cover will leave you shrieking like Sidney Prescott, but unlike her, yours will be with delight rather than fear!  Do you like scary movies?