SNL Hans and Franz Pump You Up T-Shirt 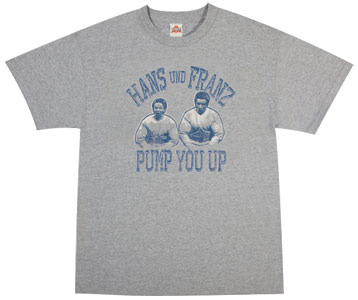 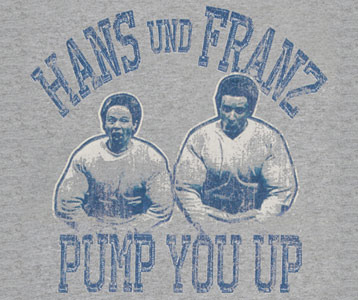 In the 1980s, pumped up Austrian action star Arnold Schwarzenegger reigned at the box office.  This Hans and Franz t-shirt features the muscle-bound characters from the Saturday Night Live skit that spoofed the former bodybuilder.  Portrayed by Dana Carvey and Kevin Nealon, Hans and Franz spoke with Austrian accents and coined the phrase, “girlie men” to describe those who were not physically fit.  Schwarzenegger himself eventually appeared on their sketch “Pumping Up with Hans & Franz”, bringing it full circle as he ridiculed them for being girlie and weak.  After all, they did wear sweatsuits with fake muscles.  In the early 1990s, a spin-off movie was in the works titled Hans and Franz go to Hollywood, but the project was cancelled after the SNL inspired movies It’s Pat and Stuart Saves His Family performed poorly at the box office.  Wear this Saturday Night Live Hans and Franz shirt to let others know that you’re no girlie man.

This t-shirt was discovered at 80stees.