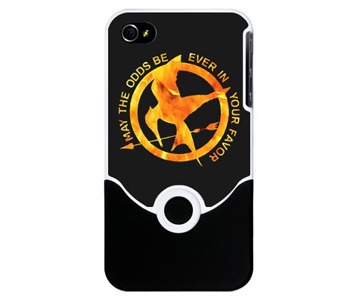 Let everyone know that you were a part of the 74th Annual Hunger Games with this unique iPhone cover.  It doesn’t matter if you are a fan of the movies or Suzanne Collins’ books, this Mockingjay Pin design is a simple way to show you’re a fan.

The story unfolds in a post-apocalyptic America, where the country has been divided into thirteen districts that exist to serve the Capitol (government).  Every year, the Capitol holds a tournament known as The Hunger Games and each functioning district is required to send two youths (or tributes) to fight to the death in an effort to win the tournament.  In reality, the Games are simply a way for the Capitol to show its force and sway the people away from the idea of future rebellions.  In both the book and the movies, we follow Katniss Everdeen, a tribute from District 12 who volunteers to compete in place of her younger sister Primrose.  The Hunger Games iPhone case will help to guarantee that the odds are ever in your favor.   The Mockingjay is a symbol of hope for the people.  It is given to Katniss in the form of a pin by the mayor’s daughter Madge.  Now you can display that same symbol and show that you’re ready to take down the Capitol.

This t-shirt was discovered at CafePress.