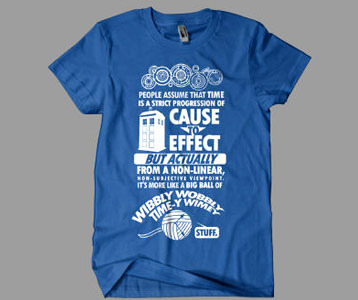 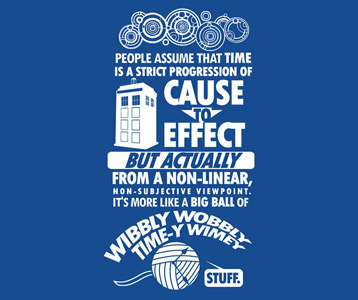 In an attempt to explain time travel, the 10th Doctor iterates, “People assume that time is a strict progression of cause to effect, but actually, from a non-linear, non-subjective viewpoint, it’s more like a big ball of wibbly wobbly timey wimey stuff.”  This t-shirt celebrates the doctor’s brilliant explanation.  Purchase it today to let everyone know that you’re a fan of the longest running sci-fi series in television history.  The initial twenty-six seasons ran from 1963 to 1989, with a TV movie airing several years later in 1996.  The Doctor Who TV show returned in 2005 to critical acclaim and a fresh crop of viewers.  Eleven actors have played the Doctor to date, with each new actor embodying a regenerated version of the old character, since in the story, Time Lords have the ability to regenerate.  Wear this Wibbly Wobbly Timey Wimey shirt to show that you too understand how time works.

This t-shirt was discovered at Neato Shop.