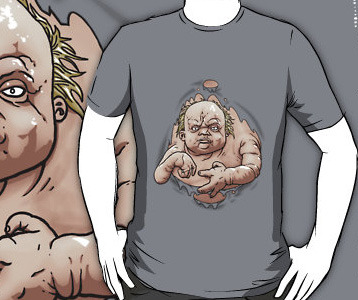 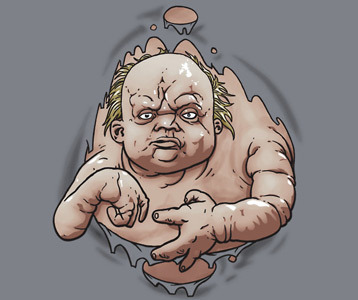 As a kid growing up in the 1980s and early 1990s, I can totally recall going to the theater to watch Arnold Schwarzenegger travel to Mars to help the rebels defeat the evil governor.  The governor held a monopoly over breathable air and was preventing the people from discovering a reactor that could infuse oxygen into the Martian atmosphere.  This Total Recall Kuato shirt features the wise mutant that Quaid (Schwarzenegger) meets on Mars.  The mutant reads Quaid's mind to help him extract a memory about the reactor.  With this Total Recall costume t-shirt, you play the role of Kuato's brother, to whom Kuato is conjoined.  Quaid is surprised when he sees the infant-like humanoid attached to his brother's stomach.  Now you can surprise others too.