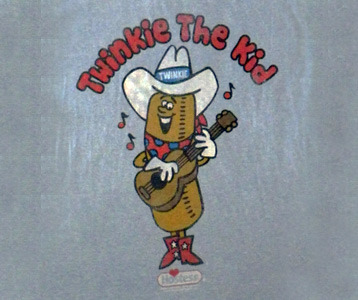 As most snack food lovers know, Twinkie the Kid is the Hostess Twinkies mascot who has appeared in TV commercials, on product packaging and in the form of various collectibles.  With the era of Hostess Twinkies coming to an end, it's no surprise that Twinkie clothing and merchandise like this Twinkie the Kid t-shirt are being bought up quickly by fans of the delectable spongy cream-filled treats.  The character on this Twinkie Mascot shirt displays anthropomorphic attributes, including the wearing of a cowboy hat, boots, gloves and a kerchief.  Show off the recognizable wrangler who has helped the snack cakes to become an iconic pop culture staple.

This t-shirt was discovered at eBay.