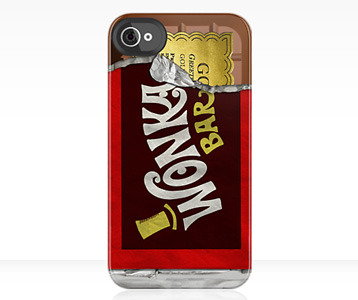 Imagine that the Golden Ticket is hidden inside this Willy Wonka iPhone case.  Even better yet, display the Golden Ticket as your phone’s wallpaper and you’ll be the winner every time you answer.  However, we can’t promise that you’ll get to go on a tour of Willy Wonka’s mysterious candy factory or meet his crew of Oompa Loompas.  Instead, you’ll just have a sweet iPhone cover that will make everyone around you hungry for chocolate.

The 1971 movie Willy Wonka and the Chocolate Factory starring Gene Wilder is based on Roald Dahl’s 1964 novel Charlie and the Chocolate Factory.  In the movie, five Golden Tickets are hidden inside of Wonka Bars that are sold all over the world.  The winning children get to tour Willy Wonka’s candy factory.  After four of the children prove that they’re not worthy of Wonka’s prize, only young Charlie Bucket remains after the tour.  Whether he will get the prize depends on whether he can redeem himself after having indulged in Wonka’s Fizzy Lifting drinks without permission.  If you are a fan of the movie, the 2005 remake Charlie and the Chocolate Factory, or chocolate in general, this Wonka Bar iPhone case is the perfect treat.